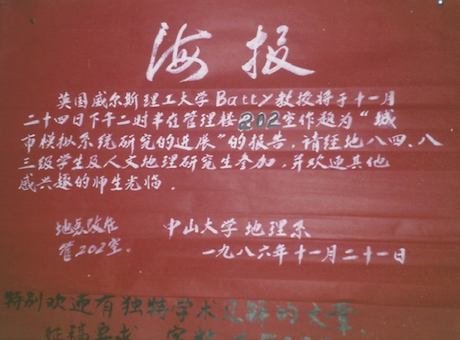 In November 1986 I visited SunYatSen University and gave a public lecture about Urban Modelling. China was a very different world then, no cars, no computers, no email, barely functioning electricity. And of course it was before laptops, networks, hand-held devices and so on. The personal computer had only just been invented. The campus was more or less in the countryside. Despite China opening up in 1979, this was still the old China.

Fast forward 31 years to 2017. The University is now a power house, in the top 10 in China and advancing in the QS university rankings worldwide very rapidly. Since 1986, I have been there a number of times but I never gave any more public lectures until last Tuesday and Wednesday when I more or less repeated what I had talked about 31 years ago. Well not quite, of course; it was the same domain of interest and in the same lineage – but I talked about web-based, large-scale urban models, ideas about big data, smart cities and so on. A world away from those distant years but closely linked intellectually. 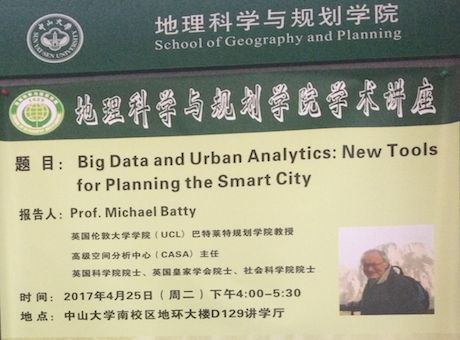 There are no faculty left still working in the School of Geography and Planning from those years but this is not unusual because there is no one left in any of the universities I have worked in before 1990. And it is a little sad that of those who were students then and now senior faculty there, none could remember attending my lecture and I am sure they did not know of it but there were about 130 in the room at the time. I found the building I had lectured in largely because of the poster above which was hand painted for my 1986 visit. Those of you who are Chinese will be able to read this.

Here are the pdfs of the presentations I gave:

I chair CASA at UCL which I set up in 1995. I am Bartlett Professor In UCL.
View all posts by Michael Batty →
This entry was posted in Big Data, Complexity, Connectivity, Flows, Information, LUTI models, Smart Cities, Transport Models, Urban Models, Visualisation. Bookmark the permalink.