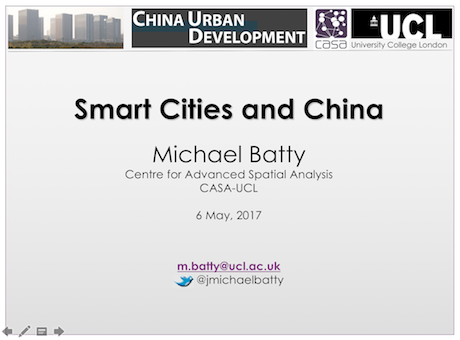 Fulong Wu and his colleagues from the Bartlett School of Planning together with Peking University with several sponsors (see web site)  ran a great meeting Friday and Saturday 5-6 May in UCL which gathered together some 200 researchers and academics studying urban development in China is all its aspects. The web site contains the programme and a variety of contributions from Zipf’s law for Chinese cities to notions about state intervention and the crisis of debt pervading China’s cities and economies.

Conscious of the fact that I have spent 7 weeks in Hong Kong so far this year, where I have spoken about smart cities many times to groups at HCUHK, HKU and PolyU as well as SunYatSen University, I contributed a short talk on a key issue about smart cities in China, making the point that apart from cultural and economic differences which pervade all global comparisons of cities, the development of new IT in Chinese cities is not so different from cities in the west in general and the UK in particular. Bigger phones exist in China, more people (almost everyone) use them on the subways but the same old problems of implementing top down inspired plans to implement new IT in cities are the same everywhere. The experience to date of such large scale corporate ventures has not been good in the west and I expect it will be no better in China.

It’s hard, many IT plans fail but cities in China and elsewhere are built largely from the bottom up – they are complex systems – and how we deploy new technologies is really the driving force of the smart cities, in fact the driving force of the city in all its manifestations. Here is my very short PowerPoint as a PDF – so you can load it and click on the active links,. But for the real experience of the diversity and quality of the meeting, go to the web site and follow the titles and links there to get a sample of how rich the meeting was.

I chair CASA at UCL which I set up in 1995. I am Bartlett Professor In UCL.
View all posts by Michael Batty →
This entry was posted in Big Data, city size, Complexity, Information, Smart Cities. Bookmark the permalink.