Cities and Civilization, and other classic reviews 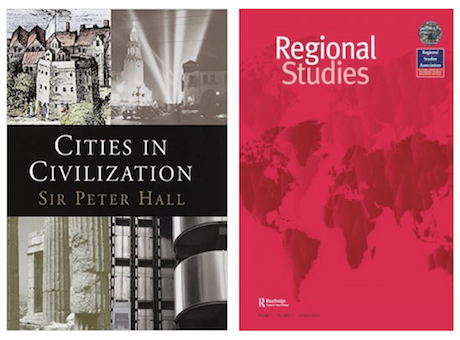 This year is the 50th Anniversary of Regional Studies, the journal. Peter Hall was the first editor and my early years as a lecturer coincided with his stewardship of the journal and his role as Head of Department of Geography in the University of Reading where we were given an insight into how you start a journal, review the papers submitted and immerse yourself in the insights that this new field and journal generated back then. I cannot take you back to those heady times but to get some sense of the excitement of those years, Ugo Fratesi has selected a set of books which he and the reviewers he has chosen consider as classic books in Regional Studies. He explains why in his editorial which you can download here. where he introduces the 50th Anniversary Book Review Collection. I have a short review there on Peter Hall’s classic Cities in Civilisation and I have reproduced the piece here that you can download.

About the collections of reviews, I can do not better than quote from Ugo’s editorial:

“Selecting classic books is not an easy task. Furthermore, Regional Studies is an interdisciplinary journal that covers theoretical, empirical and policy research in the field of regional studies. As such, it brings together articles from economics, geography, planning and political science, whose scope is regional and local. One selection process would be a systematic survey among scholars, but this would produce an index of popularity more than of the real innovative nature of the book. The pattern followed here has been less systematic and more customized. The author of this editorial started with a list of 60 possible influential books, basically selected from among those which he feels the need to have on his own shelves.

The list only included books that were either at least 30 years old or, if more recent, written by authors no longer alive. These parameters were motivated by the fact that, in assessing the long-run impact of books, some separation in time is necessary. The list and the personal preferences of the Book Reviews Editor were discussed at an editors’ meeting, after which the list was shortened to 15 books, selected to represent the various topics that stratify in a multidisciplinary journal such as Regional Studies. The final cut was determined by need and opportunity; established and important scholars within their field were required to write these essays, so the reviews published will be of those books for which it was possible to find a suitable reviewer who agreed to write the essay within the short-time frame provided.

The list of those who accepted this proposal includes a number of well-known scholars who will review some of the most important classics in various disciplines related to regional studies. The final list includes Michael Batty on Peter Hall’s Cities in Civilization (1998), Henry Yeung on Albert O. Hirschman’s The Strategy of Economic Development (1958), Gilles Duranton on Jane Jacobs’s The Economy of Cities (1969) and The Death and Life of Great American Cities (1961), Steven Brakman and Harry Garretsen on Nicholas Kaldor’s Economics without Equilibrium (1985), Peter Sunley on Marshall’s Principles of Economics (1890), Mick Dunford on Doreen Massey’s Spatial Divisions of Labour (1995), Eric Sheppard on Gunnar Myrdal’s Economic Theory and Underdeveloped Regions (1957), Philip McCann on Harry W. Richardson’s Regional Growth Theory (1973), and Michael Fritsch on Joseph A. Schumpeter’s The Theory of Economic Development (1943). “

You can read my essay on Cities and Civilization here and get access to the entire collection by clicking on this link.

I chair CASA at UCL which I set up in 1995. I am Bartlett Professor In UCL.
View all posts by Michael Batty →
This entry was posted in city size, Complexity, Economies of scale. Bookmark the permalink.