The Israel Pollak Lectures at Technion 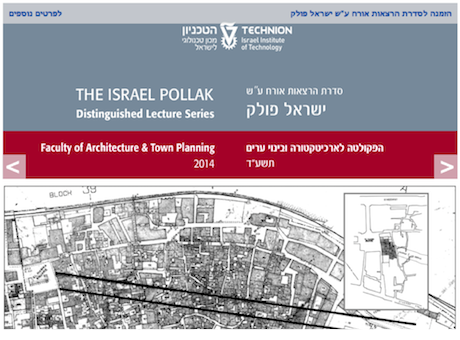 This past week I have been giving the Israel Pollack distinguished lecture series at Technion in Haifa, the School of Architecture and Town Planning, talking about smart cities and big data (PDF here), and rank clocks and scaling (PDF here). Technion is the power house of Israeli science inaugurated in 1923 by Albert Einstein and it has become the MIT of the nation. Visits like this are great in terms of meeting new people and learning about new ideas but by the strangest quirk, I never imagined that the world would be so small. Going to downtown Haifa with Dafna Fisher-Gewirtzman a couple of days ago, she mentioned that we would be eating dinner in the Holliday building. I think she must have mentioned that Holliday was an English architect who had designed a small block of streets in downtown Haifa in the 1930s and I suddenly wondered if it was the same Holliday who was the first Professor of Town and Country Planning at the University of Manchester where I was a student and where I received the Holliday prize in 1966. Unusual spelling of his name but it might be coincidence and as I never knew anything about him – he died in post in 1960 two years before I entered the School – I had never tried to trace his origins. His son John, I believe, was Head of the Planning School at Lanchester Polytechnic in the 1960s too, and I knew John but had never discussed his father.

It turned out that indeed this was Clifford Holliday, the same, and that he was in Palestine from 1922 to 1935 working as a town planner. In fact he had worked on the plan for Haifa with Sir Patrick Abercrombie who was my predecessor as Bartlett Professor of Planning some 6 professors ago and that the Bartlett Professor 5 ago – Lord William Holford  – had also worked on the plan. The world was indeed small in those days and of course Sir Patrick Geddes (who as avid readers of his life will know designed the early plans for Jerusalem and Tel-Aviv) was also in UCL as Instructor in Physiology in 1878. I am intrigued by the way the dynasty of planning professors was then connected and I hadn’t imagine that Manchester was linked to the Liverpool-London axis in this particular way.

I can find little about what Holliday did but I know there are one or two papers. The best I could find by Googling him was the following from Answers.com

“Albert Clifford Holliday (b Gildersome, W. Yorks, 21 Dec 1897; d Manchester, 26 Sept 1960). English architect and urban planner. On graduating from the University of Liverpool in Architecture and Civic Design, he went to Palestine (1922), succeeding C. R. Ashbee as Civic Adviser to the City of Jerusalem. In 1927 he began private practice, serving also as Town Planning Adviser to the Palestine Government. In these various capacities, he was central to many major planning proposals, including the master plan (1926-30) of Jerusalem, the restoration of the walls and gates of the Old City and, together with Patrick Abercrombie, a regional plan (1933-66) for Haifa Bay, for the Jewish National Fund. His work in Jerusalem was traditional, responding sensitively to local climate, materials and culture: Barclays Bank, the ‘Khan’ of St John’s Ophthalmic Hospital (1929-30) and his undisputed masterpiece, St Andrew’s Church of Scotland (1927-30). With the Israeli architect Richard Kauffmann he planned the Reclamation Area (1929-31) in Haifa, adjacent to the new harbour; later, as consulting architect (1933-7), he set the architectural guidelines for its development: an exercise in civic design innovative in process, impressive in extent and urbane in character.”

Incidentally I can find even less on the web about the prize I got in 1966 which was well established then and for all I know it may be long gone – and the only reference on the web is to my own CV ! Universities have a nasty habit of forgetting their history. C’est La Vie.

I chair CASA at UCL which I set up in 1995. I am Bartlett Professor In UCL.
View all posts by Michael Batty →
This entry was posted in allometry, Big Data, Complexity, Emergence, LUTI models, power laws, rank size, Scaling, Smart Cities. Bookmark the permalink.