The Transformation of Tel Aviv 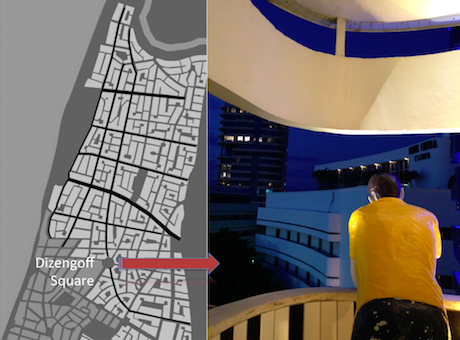 Tel Aviv is fast becoming an ever more powerful symbol of high tech. In the 1920s before the establishment of the Israeli state, it was famed for its rapid development in the Bauhaus style, and our predecessor at UCL Sir Patrick Geddes was commissioned in the 1925 to prepare a plan for its rapid expansion. Geddes’ plan is still writ-large in its wide boulevards and in its self-contained neighbourhood blocks which we illustrate in the left of the picture shown above. To the right of the picture is a photo (taken by my wife on her i-Phone an hour or so ago) of Dizengoff Square or rather Circle which lies at the heart of town at the southern extent of the Geddes’ plan. There is a nice reference to the Geddes’ plan in the article by Michael Mehaffy and his colleagues entitled “Urban nuclei and the geometry of streets: The ‘emergent neighborhoods’ model” published online in Urban Design International (2010) that you can download (gratis) here.

Of course, I would have liked to entitle this blog post after Tome Wolfe’s (1981) essay “From Our House to Bauhaus, or from CASA to Tel Aviv” but I don’t share his denunciation of modern architecture which he identified with the Bauhaus style. In fact although much of Tel Aviv is composed of wonderful Bauhaus buildings, they continue to rot in the salty air of the eastern Mediterranean yet there is a massive revival underway. The high tech and financial ethos of the city is making itself felt in dramatic new construction but this is interweaved a clear and distinctive revival of the Bauhaus and I reckon that within 20 years Tel Aviv will be one of the world’s coolest and probably richest cities, a testament to its past and the future.

I chair CASA at UCL which I set up in 1995. I am Bartlett Professor In UCL.
View all posts by Michael Batty →
This entry was posted in Networks, Smart Cities, Urban Dynamics. Bookmark the permalink.