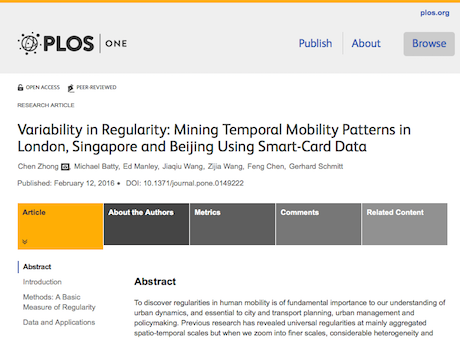 Chen Zhong is leading CASA’s work in measuring variability and regularity in big data from automated capture of travel demand on subway systems in three world cities. This paper in PLOS One is our first on a comparison of tap in and tap out data in London, Singapore and Beijing where we show how variability is greater in London than Singapore, then Beijing. We argue that this is likely to be due to the much grater crowding on the London than the other systems but also that demand management is less at subway stations than in Singapore and Beijing. Thus the culture of these places and how people travel plays a part. You can get the PDF directly with the online version here

Here is what we say about this work from the paper’s abstract:

“To discover regularities in human mobility is of fundamental importance to our understanding of urban dynamics, and essential to city and transport planning, urban management and policymaking. Previous research has revealed universal regularities at mainly aggregated spatio-temporal scales but when we zoom into finer scales, considerable heterogeneity and diversity is observed instead. The fundamental question we address in this paper is at what scales are the regularities we detect stable, explicable, and sustainable. This paper thus proposes a basic measure of variability to assess the stability of such regularities focusing mainly on changes over a range of temporal scales. We demonstrate this by comparing regularities in the urban mobility patterns in three world cities, namely London, Singapore and Beijing using one-week of smart-card data. The results show that variations in regularity scale as non-linear functions of the temporal resolution, which we measure over a scale from 1 minute to 24 hours thus reflecting the diurnal cycle of human mobility. A particularly dramatic increase in variability occurs up to the temporal scale of about 15 minutes in all three cities and this implies that limits exist when we look forward or backward with respect to making short-term predictions. The degree of regularity varies in fact from city to city with Beijing and Singapore showing higher regularity in comparison to London across all temporal scales. A detailed discussion is provided, which relates the analysis to various characteristics of the three cities. In summary, this work contributes to a deeper understanding of regularities in patterns of transit use from variations in volumes of travellers entering subway stations, it establishes a generic analytical framework for comparative studies using urban mobility data, and it provides key points for the management of variability by policy-makers intent on for making the travel experience more amenable. “

I chair CASA at UCL which I set up in 1995. I am Bartlett Professor In UCL.
View all posts by Michael Batty →
This entry was posted in allometry, Big Data, Connectivity, Flows, Graphs, Interactions, Transport Models. Bookmark the permalink.