The Fractured Nature of British Politics 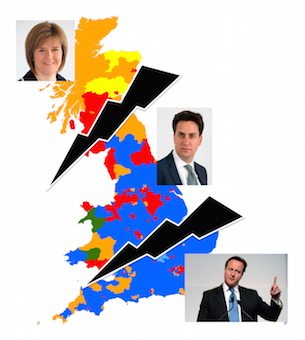 The Morning After: Predictions closer than all of us thought,  a Divided Britain

Carlos, Elsa, Duncan and myself (Mike) decided to explore next week’s British election using some of our social physics, specifically our work on uncovering urban hierarchies through percolation theory, which basically consists on looking at the connectivity of ‘representative’ areas in the street system.

This might seem an arcane way of proceeding but when we examine England, Scotland and Wales as a giant connected cluster, and then break it up by successively reducing the distances between its nodes, we first disconnect the periphery – the Scottish islands – and then quite suddenly when the threshold hits 1.4 kms, Scotland breaks off from the rest, pretty much evoking our sentiments about Scottish independence.  Reducing this further, the North and West split from the South East at around 900m and this represents the fault line that as a young student in the early 1960s, was introduced to me as the North-South divide. After this,  Wales and the West Country split off separately, evoking shades of Welsh and Cornish independence. Once we hit 300m, the big cities appear. At the same time, many of the little cities fill in the backcloth.

You could be forgiven for thinking that this is the way the British electorate might vote in next week’s election given all the hype about Scot Nats, the imminent demise of the Liberal Democrats, and the influence of the new parties such as UKIP which could be massive or could be negligible. We don’t know whether or not there will be a last minute bounce and what kind of bounce, dead cat, or otherwise.

Anyway we have had a go at producing our own predictions. And we have placed a paper in the arXiv (which will be available there next Monday) but we would like you to look at here – Click. Please re-tweet it as we want some feedback on this approach because it is much wider than next week’s election per se for it represents a new way of thinking about cities and regions and nations in this connected age. Elsa has also put our more basic paper on the methodology up at the arXiv too and you can get that here too directly.

You might also want to look at our percolation movie too which is rather neat and you can access by clicking in the link here.

I chair CASA at UCL which I set up in 1995. I am Bartlett Professor In UCL.
View all posts by Michael Batty →
This entry was posted in allometry, city size, Hierarchy, Scaling. Bookmark the permalink.