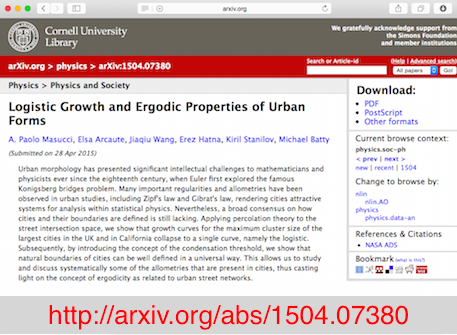 Our new paper reports research on the definition of cities led by A. Paolo Masucci with Elsa Arcaute, Jiaqiu Wang, Erez Hatna, Kiril Stanilov and Michael Batty. Its in the arXiv and you can get it here from this link. Here is the abstract:

I chair CASA at UCL which I set up in 1995. I am Bartlett Professor In UCL.
View all posts by Michael Batty →
This entry was posted in Complexity, Connectivity, Networks, Scaling. Bookmark the permalink.