A History of Transport Modelling 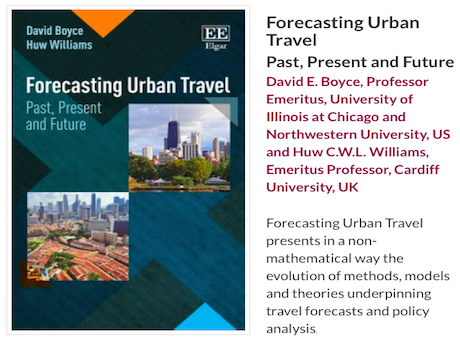 Certainly one of the best books ever on transport modelling. We have been waiting for this sort of book for a long time. Anyone who wants to figure out the reasons why different kinds of transport model have been developed during the last 60 years must read this book. It starts at the beginning round about 1953 and it brings the field up to date to 2015 covering many different approaches to models from aggregative gravitational to activity-based and on to agent-based but covering equilibrium, assignment and a host of policy issues that have directed the field over several generations of models and model-builders.

What is so good about this book is that it is intelligible and non-mathematical. Stephen Hawking says in his introduction to A Brief History of Time that his publishers advised him that the potential readership of his book would drop by half each time he introduced an algebraic equation into the manuscript, and accordingly it became a best seller. Like Hawking before them, Dave Boyce and Huw Williams are experts in the mathematics of their field, in this case transport, with Dave Boyce making pioneering applications in equilibrium analysis and Huw Williams inventing discrete choice theory in transport modelling in parallel with Ben Akiva, McFadden and others who began to introduce microeconomic foundation to transport in the 1970s. This book however simply explains all this in non-mathematical terms, providing a wonderful historical perspective and really clear exposition of the way different models and methods in the simulation of transport actually work.

I believe that this book should be read by everyone involved in transport modelling. It makes a wonderful companion to Otuzar and Willumsen’s Modelling Transport (Wiley, 2011) that is a technical and mathematical treatment of the field. Of course the publishers have priced it way out of sight and they should be encouraged to offer it much more cheaply as a soft back. It is in fact more modestly priced as as an e-book. But in the meantime, it is well worth getting hold of and making its existence known to all in the field.

I chair CASA at UCL which I set up in 1995. I am Bartlett Professor In UCL.
View all posts by Michael Batty →
This entry was posted in Flows, Interactions, LUTI models, Transport Models, Urban Models. Bookmark the permalink.