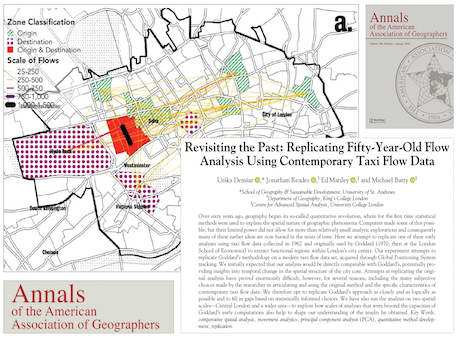 This article took 5 years in the making. We – Urskar, Jon, Ed, and myself – thought that it was a great project to see what was big data on taxi flows in central London in 1962 could be compared to a different but ‘50-year-later’ set of ‘big data’ taxi flows in the same place, collected by the limousine company Addison-Lee using their GPS technology. Lots of things turned out to be non-comparable but the issues in making such comparisons over 50 years between then and now were fascinating. Very, very few such comparisons have ever been made by anyone and nothing really in our field; and the fact that John Goddard had written a high profile paper on the 1962 data and its spatial analysis which was published in 1970, spurred us on to make a comparison. In fact without compunction, we will include access to his paper. The present papers published just this week in the Annals of the American Association of Geographers is the result – you can get the paper, yes it is Open Access – by clicking here or on the image above.

However, getting this article published was like picking hens’ teeth and even in this era of transparency, we will only give a sense of the perils and pitfalls. The original article was not much liked by the reviewers but it survived to the point where it made major revisions. This we did – despite the reviewers having little sympathy with the comparison which they said was too technical. What they wanted was us to elaborate all the detail about the social context of how we did computing back in the day and how we can’t compare then with now. We have a great story to tell on this and it is not yet told, for although we did put a little of this in one version, it was not liked either. The article went through at least four versions, from its form more or less as you read it now – to a more socially inspired version of the then and now issues, to a more technical version with some matrix algebra within. But to little avail. Although the last referees’ comments seemed to us be ‘OK’, it still got canned by the editors. Some of us thought that was it – it was dead but Urska revived the original, sent it off to the Annals, and lo and behold in record time, it got accepted. Thank you America! About time somebody said something nice about God’s Own Country.

I chair CASA at UCL which I set up in 1995. I am Bartlett Professor In UCL.
View all posts by Michael Batty →
This entry was posted in Agent-Based Models, Big Data, Connectivity, Flows, Interactions, Transport Models. Bookmark the permalink.