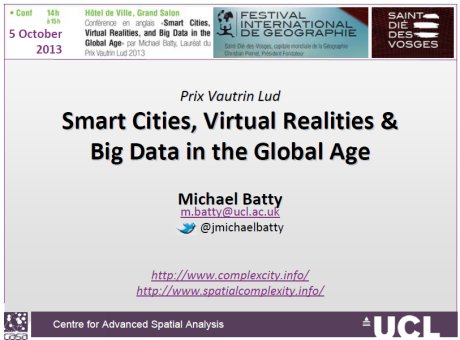 I give my Prix Vautrin-Lud Lecture today at 2pm in Saint Die des Vosges where Vautrin Lud organised the production of the first map of America in 1507. This was named after Amerigo Vespucci, an early traveller to America who followed in the footsteps of Columbus and argued that the land mass that was found was not linked to China but a separate continent. Amerigo who died in1512 gave his name to the continent or at least the geographers who were reconstructing Ptolemy’s The Geography in Saint Die des Vosges  in 1507 did. The town organises the Festival International de Geographie each year which brings many geographers together to celebrate the subject. A real extravaganza and culinary delight as well. Here’s the lecture which is more of the same stuff which you have seen before but have a look at the history which is interesting.

I chair CASA at UCL which I set up in 1995. I am Bartlett Professor In UCL.
View all posts by Michael Batty →
This entry was posted in Big Data, Complexity, Information, Smart Cities, Urban Models. Bookmark the permalink.