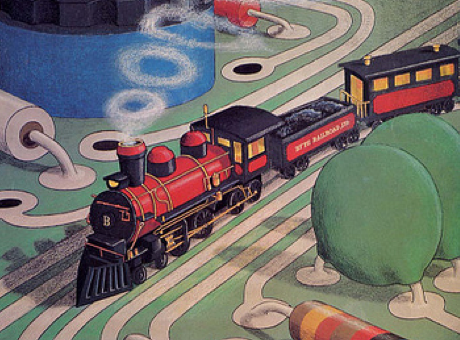 Robert Gordon of Northwestern University argues that we are coming to the end of more than 200 years of rapid growth in GDP. The third industrial revolution after steam which was the first, and electricity and chemistry, the second, and which involves innovations using information (ICT) will never realise the kind of growth we have seen over the last 200 years. The end of growth as we know it flies in the face of the argument that smart cities is the next revolution in ICT and will yield enormous benefits. Krugman’s recent Op-Ed in the NYT provides a nice summary, Gordon’s (2012) paper is very readable and I have made my own summary which can be downloaded here. The picture above is a play on steam versus ICT from Byte magazine, long discontinued, which had some superb covers positing IT against real systems. This picture is from Byte, 1977, Vol 2, no 7.

I chair CASA at UCL which I set up in 1995. I am Bartlett Professor In UCL.
View all posts by Michael Batty →
This entry was posted in Big Data, Complexity, Interactions, Smart Cities. Bookmark the permalink.