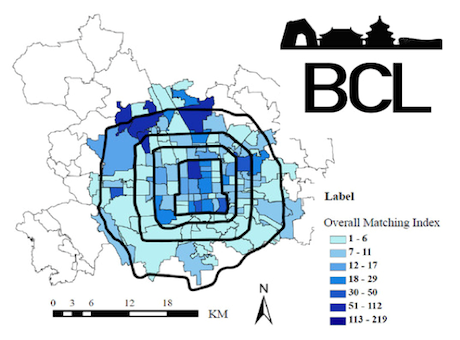 A fascinating virtual lab pulling together research in urban science focussed on researchers from several Chinese universities and agencies in Beijing. From their site, they say “The Beijing City Lab (BCL) is a virtual research community, dedicated to studying, but not limited to, China’s capital Beijing. The Lab focuses on employing interdisciplinary methods to quantify urban dynamics, generating new insights for urban planning and governance, and ultimately producing the science of cities required for sustainable urban development. The lab’s current mix of planners, architects, geographers, economists, and policy analysts lends unique research strength.” Drill down for working papers, reports and new research into the structure and function of Beijing with some interesting research in big data and urban movement. But the site also contains work by Chinese scholars on other applications, for example some in the UK and elsewhere. It was founded by Dr. Ying Long 龙瀛.

The site continues saying “The BCL is … China’s first open urban research network, and contributing to the global intellectual commons. The BCL produces and disseminates knowledge of Beijing in a number of ways: 1. The BCL serves as a networking platform for its research fellows and student members. 2. Urban researchers are invited to use the working paper series to disseminate their findings about Beijing. 3. The BCL’s data-sharing scheme provides open research data about Beijing to the wider scientific community.

I chair CASA at UCL which I set up in 1995. I am Bartlett Professor In UCL.
View all posts by Michael Batty →
This entry was posted in Agent-Based Models, Big Data, Cellular Automata, LUTI models, Networks, Smart Cities. Bookmark the permalink.