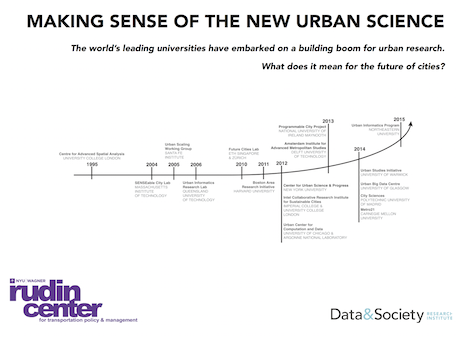 An interesting report funded by the MacArthur and Knight Foundations by Anthony Townsend of Smart Cities fame about the rapid emergence of urban science and the flurry of centres that have grown up in the wake of these new ideas as well as the development of smart cities and their technologies. We in CASA are earmarked as beginning the trend initially as a GIS-spatial analysis centre with a focus on cities – but way ahead of the curve – with some morphing of our mission towards new goals pertaining to modelling and visualisation using computers and cities within the last decade. The report also refers to my ESRC report Urban Informatics and Big Data which you can also download here alongside Anthony’s report.

I chair CASA at UCL which I set up in 1995. I am Bartlett Professor In UCL.
View all posts by Michael Batty →
This entry was posted in Big Data, Complexity, Information, Interactions, Smart Cities, Urban Models. Bookmark the permalink.