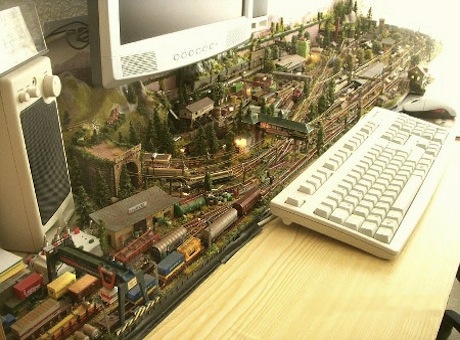 40 years ago, Douglass B Lee published his notorious article “Requiem for Large Scale Models” in the Journal of the American Institute of Planners on the demise of the first generation of urban computer models in the United States. In it he identified seven ‘deadly’ sins of modelling: defining these relative to our understanding of cities at that time and the technologies used to implement the models as: Hypercomprehensiveness, Grossness, Hungriness, Wrong-headedness, Complicatedness, Mechanicalness, and Expensiveness.

20 years ago, a number of us – myself, Britton Harris and Michael Wegener gathered under the auspices of Dick Klosterman in Chicago at the APA conference to review Lee’s findings. This lead to a special issue of the Journal of the American Planning Association (renamed from the JAIP) where we all recounted our reactions to the intervening 20 years with respect to large-scale models. In fact the field was just about to upturn at that point. Large scale models we need – indeed desperately so – to examine and structure impacts analysis –and a year later in Dallas Texas federal highways sponsored a meeting that we to assess the field and provide momentum for the continued upturn. In fact the special issue was rather disappointing. It was written at a turning point for sure and since then the field has revived in some respects and certainly there are now many more and different types of urban models. But in way we are still grappling with the problems of dynamics, equilibria,  predictions from such models and of course they way we might use them in supporting planning. A recent theme issue of Environment and Planning B reviews progress with LUTI models

20 years on again and we face new issues. Large-scale models almost seem like history now with new approaches to cities coming from every quarter. In particular the smart cities movement is generating enormous momentum and big data is shortening the time horizons over which we might consider planning to be effective. In some respects the new found interest in smart cities is attracting a very different set of people who are intent on computerising our approach to their management and understanding and I wonder just what this holds for applications. Are we about to repeat the mistakes of the past? Does new technology imply that we will always overreach ourselves? What are dilemmas and pitfalls of big data, new forms of management and control using computer systems and so on?

In these two commentaries in the current issue of Environment and Planning B, we seek to unpack these notions. Marco te Brömmelstroet, Peter Pelzer, and Stan Geertman first review Lee’s article and then your truly comments on these issues in terms of the smart cities movement.  I will not elaborate this message further but simply refer you to these commentaries and urge you to form your own views of what is happening now and how it relates to what wee happening then. It’s a fascinating dilemma.

The picture above is taken from http://www.toysperiod.com/blog/scale-models/toysperiods-model-railroader-review-2004-2010/

I chair CASA at UCL which I set up in 1995. I am Bartlett Professor In UCL.
View all posts by Michael Batty →
This entry was posted in Agent-Based Models, LUTI models, Planning Support, Smart Cities, Urban Models. Bookmark the permalink.