The Other Mobile Surveillance 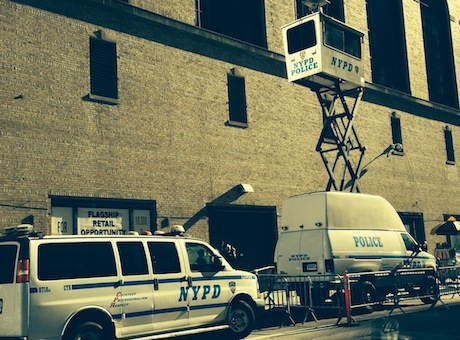 There are just some photographs that speak for themselves. Admittedly this van is positioned to watch over 1 World Trade Center but it is quite a surprise if you think it is just another police van when its camera suddenly ascends through the roof without warning.  London is regarded as the most looked at city with respect to closed circuit TV surveillance and the City of London introduced sentry boxes for police and online cameras after the IRA mainland bombing campaign about 20 or more years ago. Only in the last five years have these been reduced in frequency of use. Another gem from New York is the armed coastguard with the submachine gun shadowing the Staten Island Ferry. I don’t know what is better – whether you should see this going on or not see it but know it is. Seen all in the space of two hours in downtown Manhattan. What next!

I chair CASA at UCL which I set up in 1995. I am Bartlett Professor In UCL.
View all posts by Michael Batty →
This entry was posted in Big Data, Interactions, Smart Cities. Bookmark the permalink.