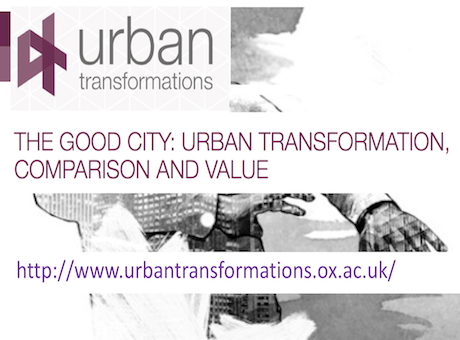 The Urban Transformations Consortium’s Conference on the theme of the ‘Good City’ was held in Oxford last week from April 18thto 20th. A variety of approaches to cities were presented with panel sessions devoted to healthy cities, shelter and ownership, labour markets and migration, environment and technology and social movements. These were contested with a series of more methodological and philosophic statements focussing around cities: the orderly city, the spontaneous city, the intelligent city, the self-sufficient city, the sustainable city and the imaginative city. Five keynote presentations were the highlights between the working sessions with contributions from different cities around the world: Detroit, Durban, Johannesburg, Sao Paulo and London. You can see the program by clicking here.

My own contribution was the last one where I drew from our work in CASA in London with my themes that the city can be read through the generic theme of information – not smart cities, or even intelligent cities or virtual cities but information cities. Thus is an old idea but it is increasingly necessary to think of cities as being the hubs of information flow as we transform headlong from a world dominated by energy to one of information. I had a go at starting my talk by walking through a little fragment of the city and explaining how information technology characterises what we see on the walk, in the past as well as the present, but as a prelude to the future. You can get my talk if you click here and on the image above.

I chair CASA at UCL which I set up in 1995. I am Bartlett Professor In UCL.
View all posts by Michael Batty →
This entry was posted in city size, Complexity, Emergence, Information, Smart Cities. Bookmark the permalink.