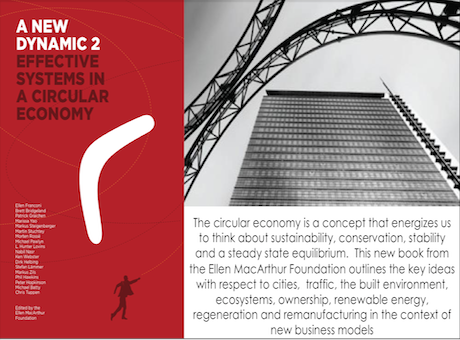 The new book from the Ellen MacArthur Foundation contains a series of articles on cities and the built environment that relates to renewability and regeneration in terms of energy, information and new ways of conserving both physical and human resources. I have a chapter here on cities where I examine how we might think about circularity of resources use within the city arguing that we need to generate a renewable infrastructure with respect to how we move between places in the city. To break the non renewable cycle generating ever more urban growth we need to generate a balanced city structure in which our movement patterns are supported and sustained by resources that are self-generated. This probably means a shift from non renewable fuels but ti does not necessarily mean the end of urban growth for it the system is sustainable, then cities can begin to grow in a balanced way. Besides changing our use of energy we may substitute it with information and that probably means autonomous vehicles that use much less energy (but still some) but focus on how best to move using information as a key resource. Anyway what I walk about is rather speculative but it is all part of our new concern for the fact that new urban forms will emerge as we move towards a circylkar economy, with the age-old link between form and functions – which is breaking anyway in the information age – becoming significant in very different ways from the past.

I chair CASA at UCL which I set up in 1995. I am Bartlett Professor In UCL.
View all posts by Michael Batty →
This entry was posted in city size, Complexity, Emergence, Smart Cities, Urban Dynamics. Bookmark the permalink.