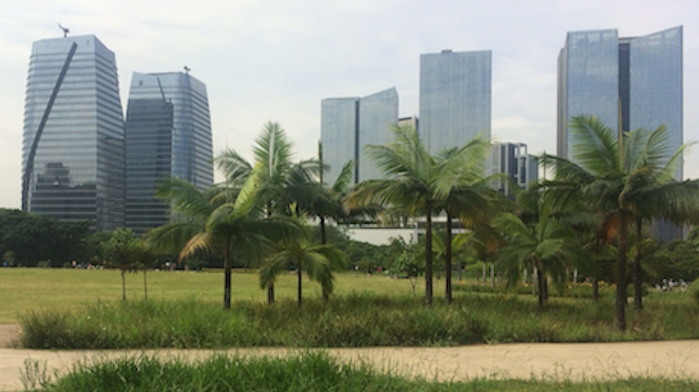 A picture of the second CBD in Sao Paulo rapidly developing as a major financial-retailing centre in Itaim Bibi some 10 kms south west of the established centre at Paulista.

Our ESRC project with the University of Sao Paulo and INPE which will involve quantitative comparisons of spatial and social segregation with a strong focus on transport accessibility, was launched in Sao Paulo on November 26-27 at the Center for Metropolitan Studies. The London team is led by Mike Batty (CASA-UCL) and Joana Barros (Geography, Birkbeck) with Chen Zhong (CASA-UCL) as research associate. Duncan Smith (CASA-UCL) has been drafted in to help with the web based mapping and portals. In Sao Paulo , the team is headed up by Eduardo Marques (USP) and Flavia Feitosa, Center for Engineering, Modeling and Applied Social Sciences, Universidade Federal do ABC (CECS) , supported by Miguel Vieira Monteiro (INPE: Brazilian Institute of Space Research, DivisÃ£o de Processamento de Imagens). The project is part of the ESRC’s Urban Transformations thematic programme and will draw on cognate material from other relevant projects within that theme.

What we are doing in this project is measuring and modelling social and spatial segregation in the two metro areas which are roughly comparable in size (15-20 millions). RESOLUTION stands for REsilient Systems fOr Land Use TransportatION and our mission is to derive measures that show resilience as well as vulnerability with respect to social and spatial segregation with a focus on transport and movement. As cities get bigger, people travel longer and commute times in Sao Paulo (SP) tend to be longer than London but the quality of the experience differs. In SP, the spatial structure of the city locks people out in ways that are different from areas of poor accessibility in London. We intend to measure this kind of lock out using access of different groups to different kinds of employment and go beyond this dealing with access to other facilities such as hospitals, schools and related welfare or lack of it. Our effort is to see where we might identify pressure points that reveal vulnerability and points where we might engender some resilience.

So far was have not completely worked out the sets of measures that we will work with but we consider local indicators of spatial association, entropy measures, distributions of uneven patterns ranging from income distributions to distributions of density – all these will be employed, following some of those we worked with in our previous modelling projects (accessibility indices) and diversity indices worked on by Chen Zhong in our recent Urban Studies paper. (You can download a copy here). We have also pencilled in that we will explore new ideas about accessibility and segregation from agent based model of transport and our aim is still to build simple ABMs reflecting household choices with respect to travel for SP and London. We do not intend to develop MATSIM for London any further in this project but something somewhat simpler that this and more focussed on segregation is on the cards. Flavia has done a lot of work already on SP with respect to modelling segregation using ABMs and we will follow her lead. Worth looking at her recent papers here.

Last but not least we are beginning by establishing two web portals – one for London and then once this is up and running an equivalent one for SP – so that we can compare data but also provide a resource that others might use to explore the same data hat we will assemble and work with. This also provides an initial focus on how we might begin our comparisons. Although we think there is reasonable comparability of data between the two cities at similar levels of spatial aggregation, until we assemble the data and develop the portals we will not know of the problems that are likely to arise.

The meeting in SP raised all these issues and more and in a two day intensive session we developed an agenda for these next six months. This will be placed on a Wiki-like page once we have absorbed all the material from this opening workshop.

I chair CASA at UCL which I set up in 1995. I am Bartlett Professor In UCL.
View all posts by Michael Batty →
This entry was posted in Agent-Based Models, Entropy, Flows, Interactions, Transport Models. Bookmark the permalink.