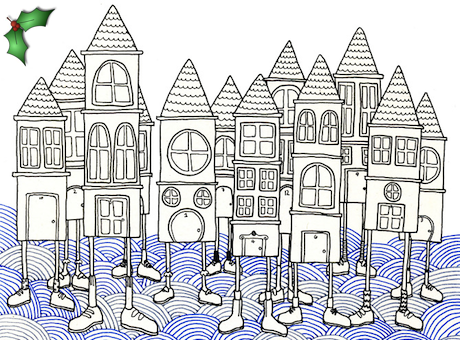 The notion that cities produce ideas goes back to the time when cities first emerged from our nomadic existence. Indeed it appears that human ‘progress’ through development is centred around the production of new ideas or at least the evolution of old ones and this takes place in primarily in cities. In the last 100 years, there has been the notion that as cities get bigger, the ideas that their occupants produce, get more than proportionately greater and this force suggests that bigger is better, reflecting itself in increasing wealth and creative pursuits. Marshall called this ‘agglomeration economies’ in his writings and argued that the proximity of individuals in an urbanised population would give rise to interaction effects that increased their production (of ideas) by a factor more than the size of population itself. If the number of ideas increases as the number of possibilities for interaction, this is the square of the population size. But there are bounds on this interaction – in a large city of a million, an individual cannot relate to everyone else whereas in a village of 100, they can. In general, there appears to be a weak force proportional to city size for generating more than proportionate returns to scale or agglomeration economies. This suggests that income or creative pursuits increase slightly more than proportionately than population as cities get bigger, that is, by population raised to a power greater than 1 but nothing like as large as 2. This is referred to in allometry as superliner scaling, with the main advocates of this approach and its validation being Luis Bettencourt and Geoff West from the Santa Fe Institute as published in their PNAS paper in 2007.

In a global world, there is some doubt about how strong is this weak force. Cities are hard to define and there is much debate about their size and shape. Density might be a better measure than population size as this includes the extent to which individuals can be packed together, and then of course, as the world becomes a global pattern of electronic communications, then what are local spatial forces may well be weakening further still. We have speculated that these are issues in our not being able to reproduce the West-Bettencourt results for the US in the UK as we discuss in our own paper on this subject. However now comes another paper that suggests that this force for agglomeration is weakening. Packalen and Bhattacharya in an NBER paper called Cities and Ideas use a data base for the US from 1830 to 2010 where they reconstruct patents from key concepts and in regressions of these data against population density, show that the superlinear force is weakening through time. This they imply is equivalent to what Marshall wrote in the 8th edition of his book Principles of Economics in 1920, and I take the quote from their paper, about the fact that agglomeration economies might weaken. He said:  ‘Every cheapening of the means of communication, every new facility for the free interchange of ideas between distant places alters the action of the forces which tend to localize industries’.

I chair CASA at UCL which I set up in 1995. I am Bartlett Professor In UCL.
View all posts by Michael Batty →
This entry was posted in Complexity, Emergence, Scaling, Urban Dynamics. Bookmark the permalink.