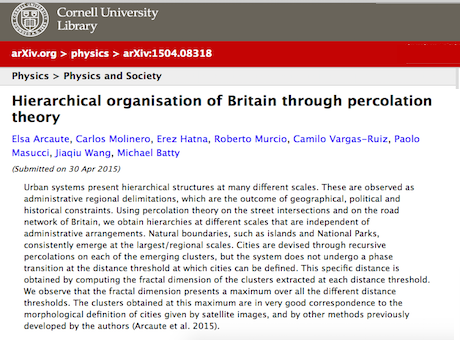 In human systems, defining any of the objects or attributes we work with is plagued with ambiguity. Defining cities is one of the classic problems and here we use percolation theory to ultimately define cities as connected clusters at a fine scale. But to do this, we begin with the nearest thing to a universal system, Britain itself. We define clusters from the digital street map which has around 3.3 million nodes and 4 million segments with an average degree of 2.34. This is essentially the street pattern at a resolution of about 75 metres – the averaging spacing between nodes. What we do is prune the giant British cluster where everything is connected. We do this by introducing a distance threshold defining clusters that remain when we throw out all those nodes that are greater than the threshold distance away from all other nodes, and we do this successively, recursively defining the remaining clusters. This produces a hierarchy of incredible depth and complexity but what it shows us is that Britain first splits into its constituent nations, then into regions and ultimately when we get down to about the 300 metre threshold, we identify its cities.

In a sense, this establishes the context. It is but one way of defining our city boundaries as clusters of nodes and links and it illustrates the kind of representational dilemmas that we work with daily in this field. There is work to be done on this relativity of our objects of definition in city systems and as you might expect we have many other related definitions of cities, as, for example, in our recent Interface paper. You can get our paper on the British percolation from the arxiv here or click on the picture above. Our paper on the recent election in Britain is also relevant and this you can get from the arxiv too.

I chair CASA at UCL which I set up in 1995. I am Bartlett Professor In UCL.
View all posts by Michael Batty →
This entry was posted in Big Data, city size, Connectivity, Hierarchy, Scaling. Bookmark the permalink.