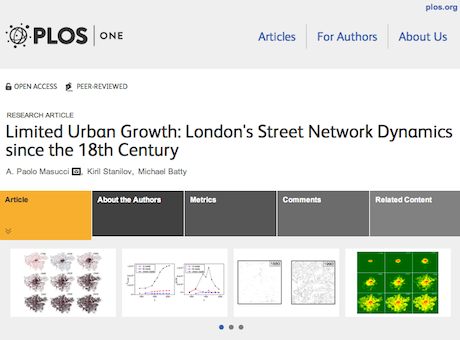 If you click here you can see out paper on the analysis of London’s street network from the 18th century to the modern day. It was published this past week (12th August) in PLoS One and is open access, the way the world will be in our domain within a decade or less. It also represents a major trend in the simulation of city systems where the historical dimension has become important, particularly as the new social physics deals a lot with physical infrastructures and these are less difficult to measure historically from many visual and map based resources that catalog the past. This does not imply that socio-economic issues are less important, far from it, but I think we will see many of these kinds of effort in the next few years as we beginning to adapt our physical models to historical processes. Click here for the PDF and above in the image for the PloS One Web Site.

I chair CASA at UCL which I set up in 1995. I am Bartlett Professor In UCL.
View all posts by Michael Batty →
This entry was posted in Complexity, Emergence, Hierarchy, Networks, Scaling. Bookmark the permalink.