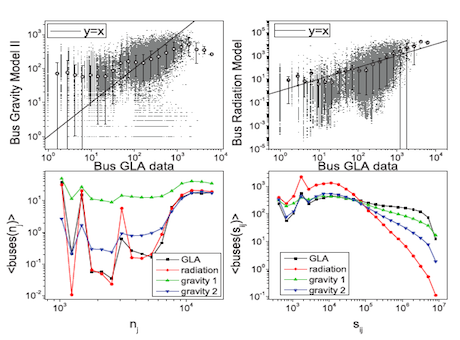 For many years, almost from the time when Newton first presented his laws of gravitation, speculations and applications of the gravity model to human interactions have been made. In the 19th century, Carey and Ravenstein led the way with Reilly, Zipf, Stewart and Warntz and then Voorhees making major contributions in the early to mid 20th century. Since then there has been an explosion of applications in transport, migration, population density analysis and so on. But there have been hardly any departures from the idea that physical space through distance is the dominating characteristic, apart perhaps from distance being substituted for intervening opportunities, and some notion that distance might be transformed to some other indicators of spatial impedance.

Recently a paper in Nature from the Barabási group has proposed that a radiation model is more appropriate where distance plays a very different role and intervening opportunities in terms of population are central. They tested this model for several geographical scales in the United States. In our paper, we present a formal test of both the gravity and radiation models developing several variants for England, Wales and Greater London, These  produce mixed results with respect to both models but demonstrate that geographical scale and the kind of interactions at different scales are important in exploring these models. You can access the paper which is printed online at Physical Review E by clicking on this link to  the PRE website where you can download it directly. The Barabási group paper is accessible if you click here.

I chair CASA at UCL which I set up in 1995. I am Bartlett Professor In UCL.
View all posts by Michael Batty →
This entry was posted in Flows, Interactions, power laws, Scaling. Bookmark the permalink.