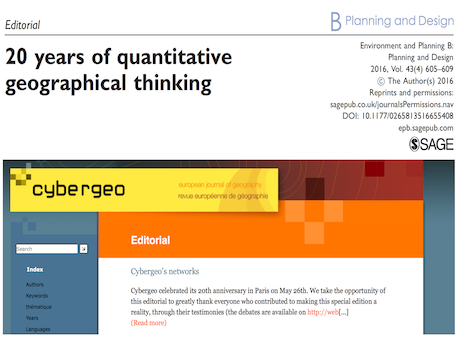 In 1996, Denise Pumain set up the online journal Cybergeo . When she first proposed this the web was in its infancy and I remember thinking that this was a very high-risk proposal in a world where the notion that we might communicate our ideas across wide-area networks was still a novelty. In 1986, email was virtually unheard of apart from a few geeks like ourselves who used computers in universities that were beginning to be networked to each other as well as connecting to the rest of the world through arcane but perfectly workable yet slow email systems such as BitNet ……. Fast forward 20 years and on 26 May 2016 (see http://cybergeo2016.sciencesconf.org/), I found myself in Paris with Helen Couclelis at the 20th anniversary of Cybergeo with both of us delivering celebratory speeches on the fact that not only had the journal survived for two decades but it had flourished as well. Only in hindsight can we say that it was a model for many other journals and in one very positive sense, it was in the vanguard of traditional hard copy journals which have fast moved during this time to the Cybergeo model …..

The world of publishing is changing dramatically – read my editorial in Environment and Planning B which covers the full impact of the online world and how we might communicate our ideas in the future.

I chair CASA at UCL which I set up in 1995. I am Bartlett Professor In UCL.
View all posts by Michael Batty →
This entry was posted in Agent-Based Models, Big Data, city size, Complexity. Bookmark the permalink.