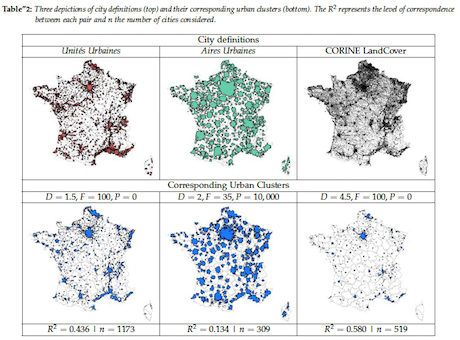 Clementine Cottineau initiated our work on paradoxical interpretations of urban scaling laws using the example of the French city system. The paper is now on the arXiv  and you get it by clicking here or going direct to the arXiv. Scaling laws for cities are controversial and the furrow that we have ploughed here in CASA argues that the definition of the city system is all important in measuring the effect of scaling. If the definition changes, so does the scaling. Scaling is an intriguing concept and the notion that as cities grow they get more than proportionately richer has many policy implications which fly in the face of the small is beautiful movement that dominated city planning for most of the last century. Here Clementine Cottineau and colleagues have unpicked the city system in France, showing much the same that we derived for the UK city system or rather England and Wales which we reported in our interface paper: namely that evidence of superlinear scaling for income and other creative industries is volatile and ambiguous. There is much more we might and will say about this topic but a key issue that we are thinking hard about is what happens to inequality as cities get bigger.

The abstract from Clementine’s paper is as follows “Scaling laws are powerful summaries of the variations of urban attributes with city size. However, the validity of their universal meaning for cities is hampered by the observation that different scaling regimes can be encountered for the same territory, time and attribute, depending on the criteria used to delineate cities. The aim of this paper is to present new insights concerning this variation, coupled with a sensitivity analysis of urban scaling in France, for several socio-economic and infrastructural attributes from data collected exhaustively at the local level. The sensitivity analysis considers different aggregations of local units for which data are given by the Population Census. We produce a large variety of definitions of cities (approximatively 5000) by aggregating local Census units corresponding to the systematic combination of three definitional criteria: density, commuting flows and population cutoffs. We then measure the magnitude of scaling estimations and their sensitivity to city definitions for several urban indicators, showing for example that simple population cutoffs impact dramatically on the results obtained for a given system and attribute. Variations are interpreted with respect to the meaning of the attributes (socio-economic descriptors as well as infrastructure) and the urban definitions used (understood as the combination of the three criteria). Because of the Modifiable Areal Unit Problem (MAUP) and of the heterogeneous morphologies and social landscapes in the cities’ internal space, scaling estimations are subject to large variations, distorting many of the conclusions on which generative models are based. We conclude that examining scaling variations might be an opportunity to understand better the inner composition of cities with regard to their size, i.e. to link the scales of the city-system with the system of cities.”

Here again is the link to the ArXiv

I chair CASA at UCL which I set up in 1995. I am Bartlett Professor In UCL.
View all posts by Michael Batty →
This entry was posted in allometry, city size, Hierarchy, power laws, Scaling. Bookmark the permalink.