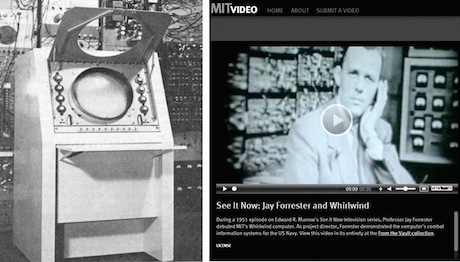 In digging up material for my smart cities lectures, I have always given a short history of computer graphics by way of background to visualization of cities. In fact the first computer graphic appears to be Jay Forrester’s demonstration of the a rocket trajectory on an oscilloscope connected to the Whirlwind computer which he demoed on Ed Murrow’s show See it Now in 1951. Until now I could not find the original piece on the web. Ed Murrow has a great clip about early TV and zoom cameras when his show began but only now have MIT released the clip of Jay Forrester from their archive. Or rather Google found the clip for me as it might have been there for a while.

Of course for aficionados of cities such as myself and this blog, Jay Forrester is far better known for one of the first explicitly dynamics models of urban growth published in his Urban Dynamics book in 1969 by MIT Press. Me and my colleague Eric Cripps almost got to meet him at MIT in 1970 but a late plane from Philadelphia to Boston conspired to defeat us in that quest. Nevertheless the MIT video or should I say CBS clip is very good watching for it demonstrates that right at the beginning, computers were being used for graphics (as well as music and so on) in Turing, von Neumann, Vannevar Bush’s conceptions of them as universal machines. And it really took another 30 years or more for them to become widely known as graphics machines. All the links are embedded in this entry in bold type that you can click on.

I chair CASA at UCL which I set up in 1995. I am Bartlett Professor In UCL.
View all posts by Michael Batty →
This entry was posted in Information, Smart Cities, Urban Models. Bookmark the permalink.