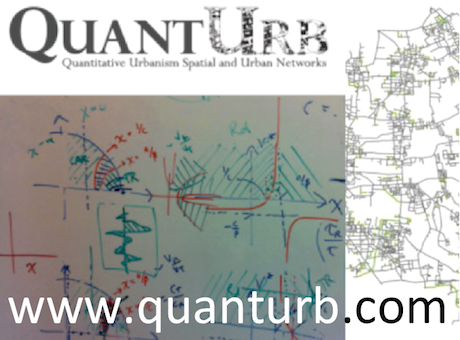 Marc Barthelemy from the Institute for Theoretical Physics (IPhT) of the CEA-Saclay (France) presented a very interesting talk on the evolution of spatial networks in cities at CASA last night (November 29). Arguing that spatial networks are often richer and less easy to understand than non-spatial structures such as social networks that are not fixed in space, he presented a number of new measures of structure which pertain to the morphology of such networks drawing on his recent papers in Scientific Reports and Interface. His web site which is noted here at www.quanturb.com presents the work of his group and provide access to some of his papers, particularly his ground-breaking paper on Spatial Networks which is key to the development of network science in spatial systems.

I chair CASA at UCL which I set up in 1995. I am Bartlett Professor In UCL.
View all posts by Michael Batty →
This entry was posted in Complexity, Flows, Hierarchy, Networks, Scaling, Uncategorized. Bookmark the permalink.