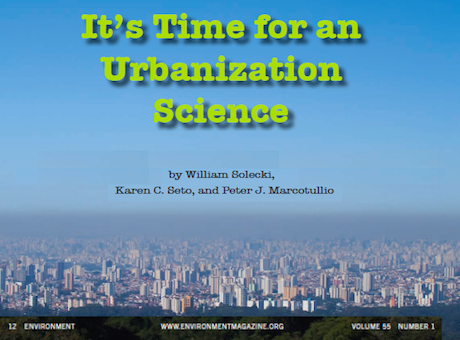 There is a lot of effort in the current developments involving computers and physics to think about cities as prompting a new kind of science of cities. Luis Bettencourt and Geoff West have argued this in a recent commentary in Nature. The effort at New York University to build a new Centre for Urban Science and Progress (CUSP) which is to develop a science of urban informatics in the living lab of New York City is yet another straw in the wind, while the recent article by Solecki, Seto, and Marcotullio ‘It’s Time for an Urbanization Science’ in the magazine Environment  develops yet another notion of what this science might be: scaling and social physics from Santa Fe, urban Informatics from CUSP, and ecological sustainability from Solecki, Seto and Marcotullio – these are but different perspectives. It might be argued too that underpinning all of these is a concern for the way cities use energy. In any event, indicators that promise to change our field in interesting and hopefully progressive ways.

I chair CASA at UCL which I set up in 1995. I am Bartlett Professor In UCL.
View all posts by Michael Batty →
This entry was posted in allometry, Big Data, Complexity, Information, Interactions, Scaling. Bookmark the permalink.