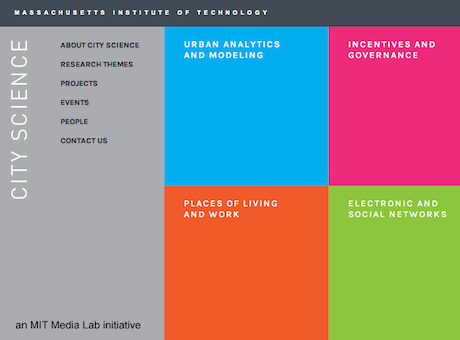 Suddenly the world seems to have woken up to the fact that we can treat cities as a science. More than 100 years ago, Patrick Geddes said “Thus, in fact, appear the methods of a Science of Cities …..”  in Cities in Evolution, and 50 years ago, we began to treat cities as systems. But it has taken another 50 for us to realise that computers are now being embedded into everyday life in a way that makes this science feasible: real time streaming of data, and the web are opening up cities to new ways of exploring how they function and how we can make them function better. MIT has many centres dealing with cities such as Senseable, the Center for Advanced Urbanism, and so on but here from the Media Lab comes another. Click to see.  I read also that Imperial College London is generating a focus on a science of cities across its domain and we in UCL have several initiatives  including our own centre CASA as well as my own interests reported in this blog and in www.complexity.info in fashioning such a science. This  of course is the age of cities.

I chair CASA at UCL which I set up in 1995. I am Bartlett Professor In UCL.
View all posts by Michael Batty →
This entry was posted in Complexity, Emergence, Fractals, Hierarchy, Networks, Scaling, Smart Cities. Bookmark the permalink.