In the Shadow of Darwin 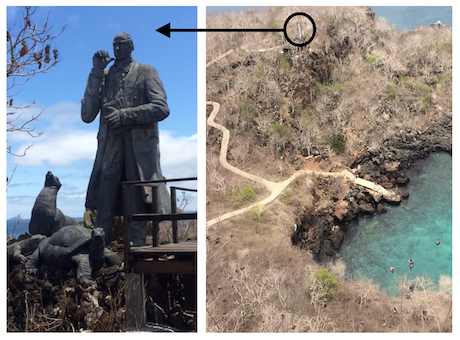 Michael Batty is working on a project with colleagues from the University of Melbourne, UNC at Chapel Hill, and the Santa Fe Institute at the Galapagos Science Centre with the Universidad San Francisco de Quito. They are exploring the way human populations are interacting with the natural ecosystem. The Islands are facing enormous population pressures from ecotourism and the group are modelling these interactions between the coupled human-natural systems using the science of complex adaptive systems (CAS).  Eventually they will produce a book about these pressures and their impact on the fragility of the ecosystems making suggestions for future change. The notion that the human and natural ecosystems remain in equilibrium is a convenient fiction and the idea that the Galapagos would have remained the same since Darwin’s historic landing in 1835 (described in his The Voyage of the Beagle) if no human populations had resided on the islands, is fanciful. Natural ecosystems evolve perhaps at a slower rate than human populations at least in terms of their migration, growth and change but these coupled systems pose special problems which have wide implications for cities and nature. The challenges for us all are enormous. They lie at the cutting edge of science and human affairs.

The pictures above show Darwin’s first landing site on the Galapagos Islands in 1835.

I chair CASA at UCL which I set up in 1995. I am Bartlett Professor In UCL.
View all posts by Michael Batty →
This entry was posted in allometry, Complexity, Connectivity, Emergence. Bookmark the permalink.