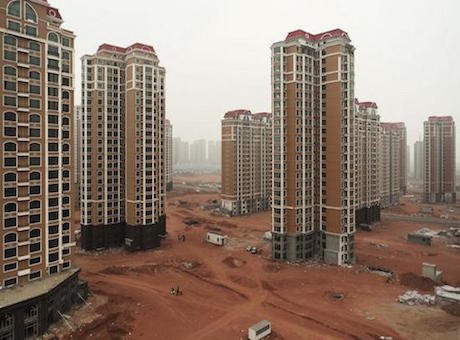 My current editorial in Environment and Planning B tracks the massive investments in infrastructure in China which have taken place since the Great Recession of 2007-2008. One of the key features of contemporary economic systems is their volatility with respect to the dynamics of property development. Building booms and busts follow major economic cycles and in Britain in the last 50 years there have been at least three if not four such cycles.

But the mother of all booms is that which has pervaded China since 2008 when the government there decided to reflate the economy by providing many with cheap finance to build. And build they did, with little reference to demand, with the boom predicated on the basis that if ‘we build it they will come’. Come they have not and as the boom turns into bust as it is fast appearing to do, its looks very much as though the market for property in China will drive wider markets relating production to consumption, possibly to collapse.

Wayne Shepard’s interesting book Ghost Cities of China (2013) poses the question as to whether or not the construction of so much property, particularly buildings meant for housing, which remain empty and are located in places that seem to have little rationale as good locations will attract populations in time as China continues to urbanise. This is an intriguing question. Our experience in western economies suggests otherwise but in the editorial, I pose the question as to whether the Chinese economy will continue to ignore the laws of financial gravity. I don’t think so but you never can tell. Recent events in the markets also suggest otherwise but with China you never know. An economy that constitutes 20 percent of world demand could well herald a new era when bubbles never burst and when investments never yield. As in most economies, at the end of the day, psychology appears to reign supreme.

There is plenty to read about all this, Robert Peston’s short videos referred to in the editorial make good watching and only this week, there are various comments on China’s economy: see for example the interesting comment in the Guardian Online

Get the editorial by clocking on the picture above or the link here.

I chair CASA at UCL which I set up in 1995. I am Bartlett Professor In UCL.
View all posts by Michael Batty →
This entry was posted in city size, Information, Smart Cities, urban and regional planning, Urban Dynamics. Bookmark the permalink.