The Strange Non-Referential Domain of Morphology 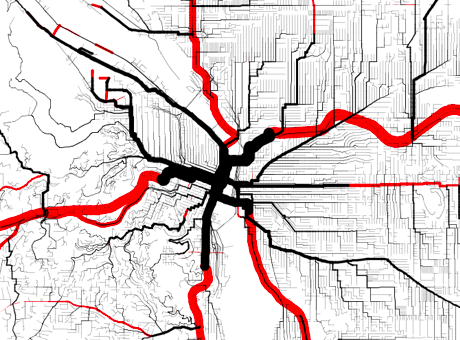 How is that a niche research area such as the shape and form of cities using various mathematical and formal principles in geometry, allometry, scaling and social physics can have several distinct approaches that never refer to one another? Fractals and scaling techniques have been around a long time and were in fact first implied by Christopher Alexander in his Notes on the Synthesis of Form, his PhD thesis in the early 1960s. He drew from the Nobel Prize Winner Herbert Simon’s inspired paper The Architecture of Complexity published in 1962 that said it all. Indeed he, Alexander, and many quantitative geographers of the time were immersed in ideas of hierarchy and overlapping systems and subsystems, and his famous paper A City is not a Tree articulated many of these concerns. But Alexander, in later life, although still alluding to complexity in his work on urban and building design, rarely refers to the body of work which has intervened. His protagonist and popularizer, Nikos Salingaros also looks inwardly to his own theories of form referring briefly to the long line of work on fractals abut not really touching much on the many ideas that have been developed about fractal cities by a host of other authors.  More recently Serge Salat particularly in his book Cities and Forms, has picked up on fractals and repeats much of what has been learned in the past 50 years for the slightly more focused field of urban design. In fact some of the key developments of these ideas in France by Pierre Frankhauser are barely referenced. In many of these contributions, energy and entropy rear their ugly heads. It is time for a more considered synthesis.

Then there is space syntax with its own referential logic that has steered clear of formal references to complexity theory and to fractals. There is plenty of discussion in space syntax about hierarchy, self organization, flow and movement but no real reference to the mainstream. And then there is the field of ‘urban morphology’ popularized in the journal of the same name that is more descriptive, building on the idiosyncratic principles of urban form laid down by Conzen fifty years ago. This is urban geography in its classic, descriptive form but there is little attempt to connect its insights to the more formal methods that have been pioneered by many in the intervening years.

And now onto this scene has come Adrian Bejan. In a remarkable series of articles over the last 15 years and now in a popular book Design in Nature, he argues that it is he who has seen the light about how all kinds of morphologies in nature and social life are determined by what he calls ‘the constructal principle’. This is an idea as old as the hills: it essentially consists of an argument that says that things flow to meet their lines of least resistance and it is this physics that determines the geometry and form of the channels in which things flow. Tree-like shapes are the ‘main result’ in everything from river to vascular systems to road systems and corporate hierarchies. Nothing that one would not agree with in principle here. What is remarkable about this book, apart from the incredibly arrogant assumption that it is he who first discovered this generic principle, is his lack of reference to everything in geometry and flow that has argued much the same for hundreds of years. He does refer to Leonardo but as with all the historical greats he refers to from Aristotle to Darwin, he always says that they were limited in explaining their observations because they did not know of the constructal law. I would submit not only did they know of it but they simply assumed it was generic, part of the context. There is of course no mention of Simon, of Alexander, of Salat, of Salingaros, and of all the work done on fractals by  mathematicians, physicists, architects, urban designers and geographers this past 50 or more years.

In fact his argument, although appealing in part for it has been assumed for a long time by many studying the physics and form of systems in this way, assumes that all systems can be explained in terms of the way their flows, the thing that make them flow which in nature is ‘water resisting gravity’, apply to all human systems such as the transport of people and goods. Of course tree-like shapes that dominate road networks where one has to move material from a point to an area is the obvious geometry but his theory does not account for the fact that the people who are constructing such systems and evolving them have some sense of the constraints that face and adapt their geometry to this. In short in human systems, the agents have foresight, they have intelligence and they can buck the constructal law at any time, if they so wish. The role of accident, historical preference, and of the need to make an impact is central to what evolves and there are countless human designs that refute the constructal law. Indeed the notion of historic path dependence says it all. Hausmann’s Paris is the archetypical example.

At some point, I will be prompted to write a longer piece on the way all these schools of thought on urban morphology fail to hang together as they are presented. But the core of these ideas is so strong that it is not hard to see that these are all different perspectives on the same set of artifacts – how flow systems – yes Bejan is right on this in my view – underpin the forms that we have evolved to move things most efficiently. Indeed the field of urban morphology is crying out for an integrated statement that all of those contributing to this wide array of perspective might agree upon.

I chair CASA at UCL which I set up in 1995. I am Bartlett Professor In UCL.
View all posts by Michael Batty →
This entry was posted in allometry, Complexity, Flows, Hierarchy, Interactions, Scaling. Bookmark the permalink.