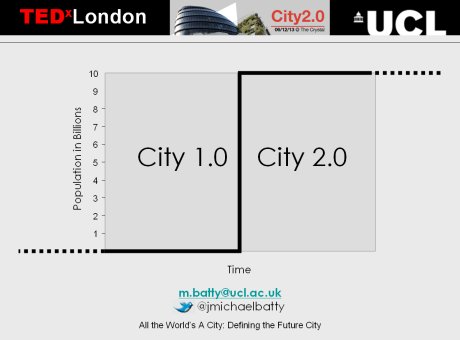 Friday December 6th I presented a TEDxLondon talk in the City 2.0 series. I must admit then when they invited me to present something on cities, I thought they had mistaken me for …. well, it was a surprise, anyway, not thinking of myself as particularly telegenic or a popular lecture circuit type.  It was a pretty inspiring event I must say – ten or more speakers all doing either 18 or 6 minutes in The Crystal – a building that looks like a stealth bomber in a place that looks as though … well it is East London and it could be nice area eventually but it is still like something out of a J. G. Ballard novel. The talk may eventually get to YouTube but I can now post it as a PDF here and it complements the  short commentary I wrote three years or so ago which contains some of this material which you can get this here too. The other stuff I talked about is our fascinating way of defining cities by pruning the network of connections, developed by our Mechanicity group in CASA led by Elsa, Erez, Pete, Paolo, et al., who are thinking about this problem. We will publish something on this very soon.

There are almost as many perspectives about cities and future cities as there are people thinking about cities, and that is probably most of us. In fact I almost became a media star in the 1970s when I made a program called Mathematics for Modelling for the Open University about retail gravity models. We have posted the video of this program online and what is brilliant about it, are the hairstyles, the clothes, the props, … it is the lapels and the bell bottom trousers that are the height of fashion then never to be repeated. Anyway you can see that here too. In fact back in 1976 when this one was made, most of us were still thinking that the world’s population would explode upwards and we would run out of resources by now and descend into chaos. And we didn’t think that the whole world would be made of cities sometime in the 21st century. This was the time of the Club or Rome and one of dire predictions for western society. China was not rising and Japan was Number One. How it all changes. My talk at TEDx is about this change and what we might expect for cities over the next 50 or 100 years.

I chair CASA at UCL which I set up in 1995. I am Bartlett Professor In UCL.
View all posts by Michael Batty →
This entry was posted in allometry, city size, Connectivity, power laws. Bookmark the permalink.