Posted on September 2, 2017 by Michael Batty 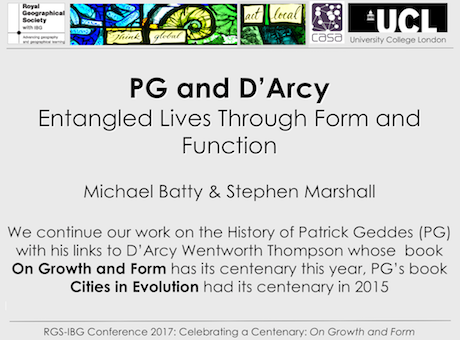 I hope more people (>2) see this post than actually attended the four lectures celebrating the contribution of D’Arcy Wentworth Thompson at this year’s RGS-IBG conference last Thursday when we presented. But such is the state of the world and especially human geography that 2 people in the audience is all that can be expected when one is celebrating one, nay two, of the great contributions from the early 20th century.

In 1915 Patrick Geddes (PG) published his great book Cities in Evolution and in 1917 D’Arcy Wentworth Thompson published his magnum opus On Growth and Form. Both books outlasted the 20th century and it is our prediction that they will outlast this one, the 21st. Not many books do that and not many that have an influence on geography but it doesn’t matter that we had more people speaking than were in the audience – we are in it for the long term! Both books are gratis – they are online and you can get them b y clicking on the links above.

Dave Unwin organised the session and introduced it. Alan Werritty then spoke on D’Arcy’s contribution to spatial form and networks, Chris Brunsdon then followed this with some key questions and extensions of two dimensional transformations – one of D’Arcy’s key tools, and then myself (with Stephen Marshall) talked about the links between Geddes (PG) and D’Arcy. One of the intriguing questions that myself and Stephen are addressing is “why is it that two people – PG and D’Arcy –spent 31 years in the same department, never published anything together, rarely spoke about each other in their voluminous letters – every one wrote letters in those days, both were sceptical Darwinists, both published their great books within 2 years of each other, and so on … “. We address this questions in the talk and you can glimpse a sense of this from our PDF that is linked to this post – click here.

The other key thing is that these two guys had a vast network of serious influential people who they met in their lifetimes – Darwin, Huxley from Thomas to Julian to Aldous, JBS Haldane and his father, Galton, Pearson, H. G. Wells, Foster, Balfour – the list goes on and on. It is a great detective story that needs a lot more work. Stephen and myself worked on PG and his contribution and we are still grappling with PG’s great dilemma – how to write or not write the great book on social evolution and cities and society that he wanted to but never did – we write a paper in Landscape and Urban Planning last year for PG’s Centenary of his 1915 book Cities in Evolution.

So there is a lot of unfinished business here. Little did I realise that I would spend a lot of time in the twilight of my career trying to unravel the book (and the person who wrote it) that I got as a school prize back in 1962 for A Level Geography.

I chair CASA at UCL which I set up in 1995. I am Bartlett Professor In UCL.
View all posts by Michael Batty →
This entry was posted in city size, Flows, Networks. Bookmark the permalink.