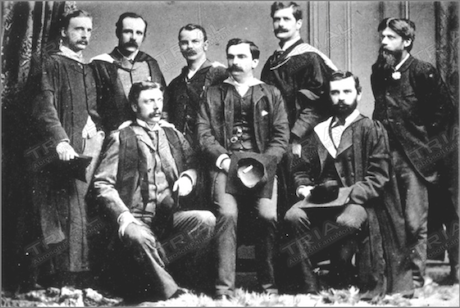 The Editor of Landscape and Urban Planning has chosen our paper by Stephen Marshall and myself on Patrick Geddes as Editor’s choice. Our prize is that you can download it free from here and I do not have to post it unofficially online.  2015 was the centenary of Geddes seminal book Cities in Evolution and the journal has a special issue on Geddes which has just been published. We have unpacked Geddes’ contributions in a paper entitled: Thinking organic, acting civic: The paradox of planning for Cities in Evolution, where we suggest that his long term quest to build a theory of social evolution was never realised despite his voluminous letters and writing, much of which was spontaneous, stimulating, insightful and of course chaotic. This year is the centenary of D’Arcy Wentworth Thompson’s great book On Growth and Form. Geddes (PG for short) and D’Arcy were colleagues at University College Dundee for over thirty years but they did not write together – despite that fact that they were talking about the same kinds of things, evolution, form, morphology, but their individual foci were quite different: PG on cities and society, D’Arcy primarily on fish. We have also done something on unpicking their interactions and we presented this at the RGS Annual conference in London in late August. You can find our post on this here.

Again download our paper from this link or by clicking on the picture of D’Arcy and PG at Dundee in the late 1880s which is shown above. PG on the extreme right; D’Arcy sitting first on the left.

I chair CASA at UCL which I set up in 1995. I am Bartlett Professor In UCL.
View all posts by Michael Batty →
This entry was posted in Complexity, Economies of scale, Flows, Information, urban and regional planning. Bookmark the permalink.