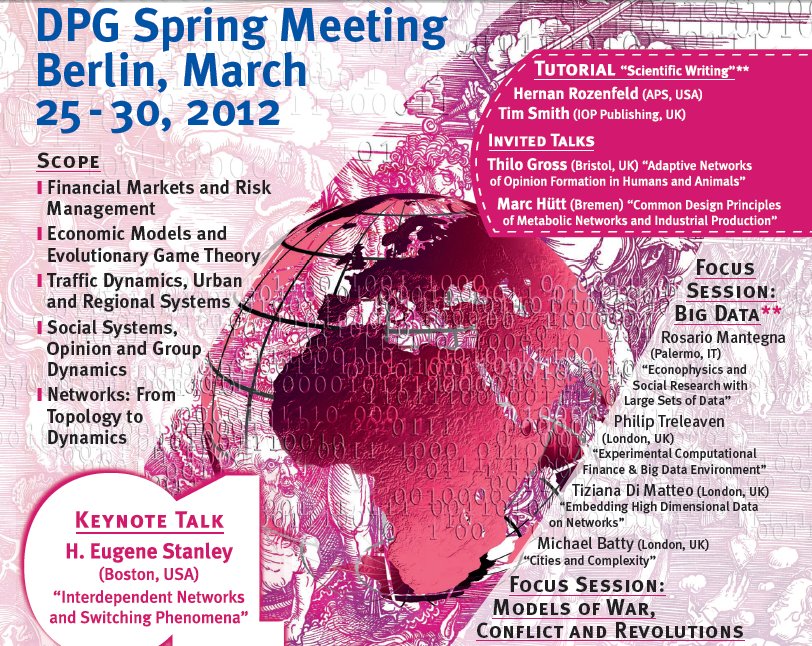 Full Details of the Meeting are Here

Various people from UCL and Kings are contributing to this meeting in Berlin. Mike Batty from CASA is talking on how cities and their evident complexity require big data which is rapidly becoming available, Phil Treleavan from CS at UCL is talking about experimental computational finance in a bid data environment, Tiziana de Matteo from Kings is talking about embedding high dimensional data on networks, and there are many other talks, including Gene Stanley on interdependent networks and switching phenomena. Gene was the first visitor we ever had at CASA and he came with Hernan Makse in January 1996 when I (Mike) was the only employee and we were working still on DLA models. We wrote a paper on this which was in Physical Review E in 1999 and as Gene had written with George Weiss who had written with Joseph Gillis who in turn had co-authored a paper with Paul Erdos, that makes my (Mike’s) Erdos Number 4!! But tens of thousands of people have this number. It’s a small world after all.

I chair CASA at UCL which I set up in 1995. I am Bartlett Professor In UCL.
View all posts by Michael Batty →
This entry was posted in Complexity, Information, Interactions, Networks, Uncategorized. Bookmark the permalink.