Outline of the Course

This course presents the basic elements of urban simulation, that is, methods and models which embody the science of cities as predictive computer models. The models included cover a wide range of types, each of which represents different aspects of the city systems that are codified in the form of simulation models. The first models developed were Land Use Transportation Models (LUTM), sometimes called Land Use Transportation Interaction (LUTI) models and these were first applied in North America from the late 1950s onwards. Further development and applications in other parts of the western world significantly in Britain and Australia began in the 1960s and 1970s. The models essentially represented the city as a set of sectors dealing with employment, population, education and so on and tied these sectors together through various kinds of flows and interactions which were conceived in terms of travel demand. They invariably define the city as a set of small zones, at a cross section in time in which activities such as population and employment are attributes of each zones and the flows or travel between zones represent the ways in which these various sectors and activities are connected.

Modellers gradually began to grapple with problems of making these models more real by disaggregating their spatial representation to ever finer zones and their demographic and economic sectors in more sectoral detail. They were also expanded to consider explicit supply side aspects of the urban economy, simulating rudimentary markets, while they also have been extended to embrace more formal temporal dynamics than the original types of such model which assumed the city to be in equilibrium. In this sense, they were/are referred to as comparative static models. These lectures will begin mainly with land use transportation models. However in parallel, other models of city systems came to be developed, particularly those that pick up on the explicit dynamics of urban change. These models are based much more on representing the system using finer spatial cells closer to representing real development than the land use and traffic zones that are intrinsic to LUTI models. They also pick up on the representation of physical layers of cities using GIS and they have been extended into representing not only fine spatial layers of cells but also individuals or agents – usually populations of individuals – who act to change the development in these cells. These cellular automata (CA) and agent based models (ABM) as they are called, have barely been linked to mainstream LUTI models as yet. In the last three lectures in this series, we will sketch their rudiments.

We thus define Urban Simulation as subsuming Land Use Transportation, Cellular Automata and Agent-Based Models, but these also extend to related modelling approaches such as systems dynamics and micro simulation which we will also note but will not cover.

In nine lecture, we will cover as many of these model types as we can. We will also introduce in the first lectures ideas about what a model is and how it can be seen as essential to the way we develop a science of cities that is useful to our understanding of the city and how it can be planned.

The lectures that are planned are titled as follows. After they have been presented, you will be able to click on each one and download the relevant pdf which it taken from the PowerPoint that contains the relevant material. These are on the web site under the relevant lecture number. 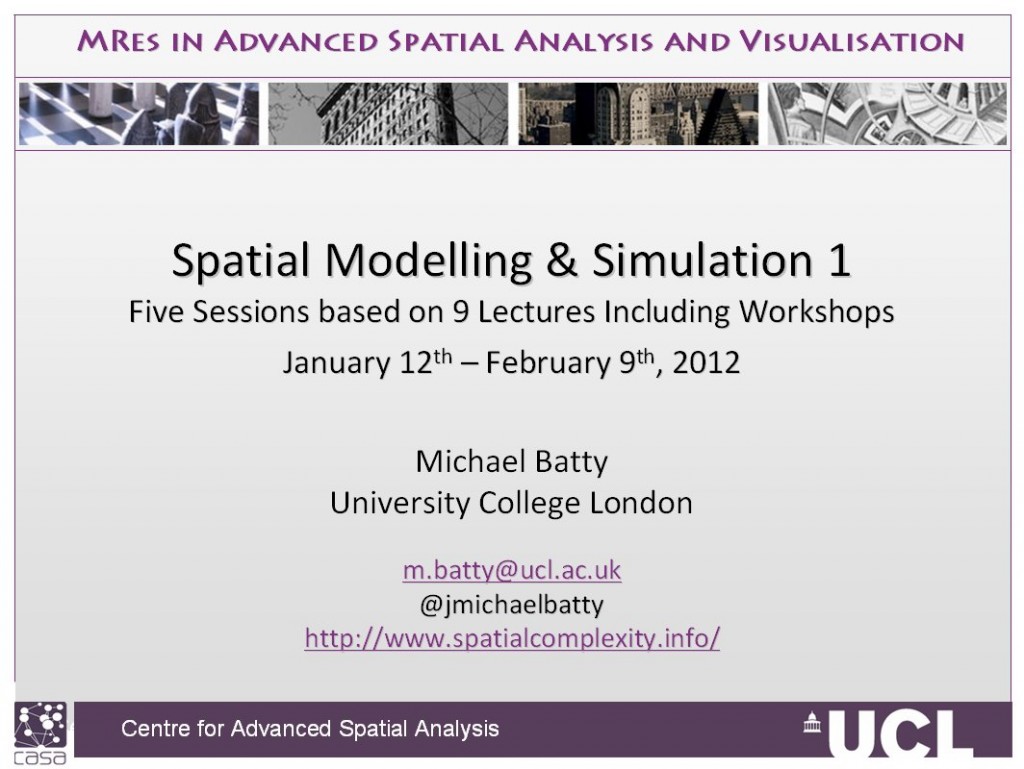 The list of lectures follows: note that some of these may run into each other and but there will be 9 distinct slots.

Lecture 1: What are Models: The Scientific Context: Definitions of Model and Theory: The Model- Building Process, Data Analysis to Calibration to Prediction

Lecture 5: Integrated Urban Models: Some of the previous Lecture 4 is repeated with better visuals

Lecture 10: is catch up …..we will be overrunning by then for sure.