Cities and regions in Britain through hierarchical percolation 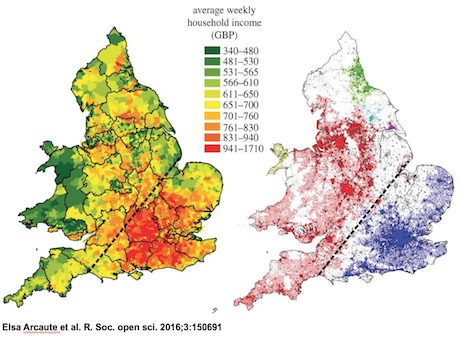 Our paper in Royal Society Open Science is published this week (April 6th 2016). This is one of the major themes in our ERC Project Mechanicity which has sought to explore how we can define and classify cities according to their size and performance using their underlying networks for the bonds that ties their parts together. There are many implications from this way of looking at things where we adopt the perspective of percolation theory for questions of globalisation, segregation, resilience and inequality. You can get the paper here – it is open source – and there is some detailed Supplementary Information that is pretty important for viewing the results.

“Urban systems present hierarchical structures at many different scales. These are observed as administrative regional delimitations which are the outcome of complex geographical, political and historical processes which leave almost indelible footprints on infrastructure such as the street network. In this work, we uncover a set of hierarchies in Britain at different scales using percolation theory on the street network and on its intersections which are the primary points of interaction and urban agglomeration. At the larger scales, the observed hierarchical structures can be interpreted as regional fractures of Britain, observed in various forms, from natural boundaries, such as National Parks, to regional divisions based on social class and wealth such as the well-known North– South divide. At smaller scales, cities are generated through recursive percolations on each of the emerging regional clusters. We examine the evolution of the morphology of the system as a whole, by measuring the fractal dimension of the clusters at each distance threshold in the percolation. We observe that this reaches a maximum plateau at a specific distance. The clusters defined at this distance threshold are in excellent correspondence with the boundaries of cities recovered from satellite images, and from previous methods
using population density.”

We have developed quite a few explorations of cities using these ideas and we posted a somewhat oblique comment on how these results related to different electoral voting in the General Election last May. There is an early paper on this that is a complement to this one in the Arxiv.

Last but not least, I have given various presentations on our percolation and allometric city size work but here is a recent powerpoint that contains more information to some extent – or at least different information that relates to our work on the UK with some hints of how we might apply it elsewhere – as in Europe for example.

I chair CASA at UCL which I set up in 1995. I am Bartlett Professor In UCL.
View all posts by Michael Batty →
This entry was posted in allometry, city size, Complexity, Economies of scale, Networks, Scaling. Bookmark the permalink.