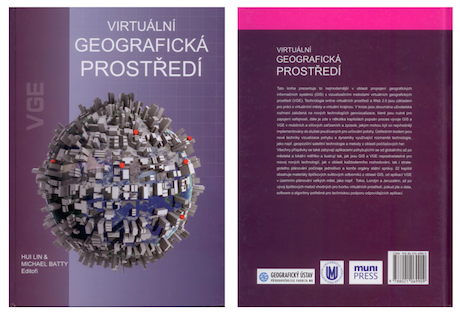 Well I don’t know what it means either. But if you read Czech you should be off to a flying start, and the Czech guy who translated it assures me that all of Eastern Europe read Czech so there you are. Well, Virtuální Geografická Prostředí or in more familiar terms Virtual Geographic Environments is the term increasingly used to embrace a range of technologies that seek to extend GIS into wider digital contexts – the web, VR, and associated ways of interacting with spatial media. Hui Lin at the Chinese University of Hong Kong popularised the term through a series of conferences and papers over the last decade or longer, and our English version of the book contains the papers presented at the second conference held at the CUHK in 2008. It is published by ESRI Press in the west. It contains the papers from the second conference on VGE held in January 2008, and some of our colleagues in CASA have papers in the volume. The picture of the ‘death star’ type globe was generated by our illustrious Director Andy Hudson-Smith. More information on the recent conference at CUHK is available on the web site.

I chair CASA at UCL which I set up in 1995. I am Bartlett Professor In UCL.
View all posts by Michael Batty →
This entry was posted in Geodesign, Information, Smart Cities. Bookmark the permalink.