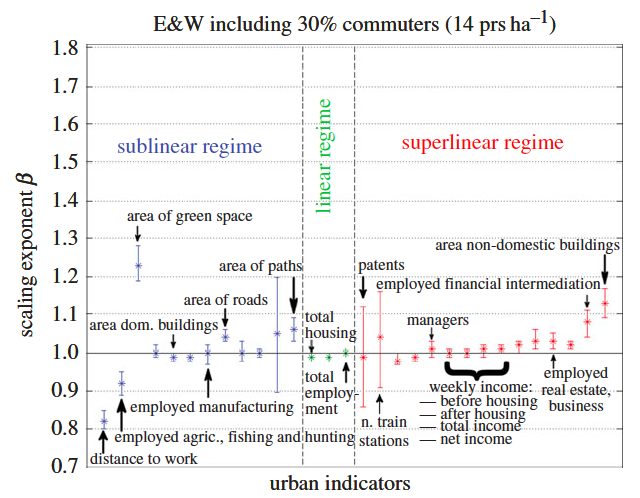 Our work on attempting to repeat the work of the Santa Fe group who show that as cities get bigger (primarily for the USA) they get more than proportionately richer, has drawn a massive blank for the UK urban system (England and Wales). It has taken us a while to get this paper published but here it is in Interface (J. R. Soc. Interface 12: 20140745) and you can get it from this blog by clicking on the link or from Interface as it is open access. Essentially what we show for UK cities, in fact for thousands of realisation of city morphologies, the super linear scaling of income against population size is for the most part not borne out. A million explanations suggests themselves, and although these are not attempted in this paper for our concern here is to show how the lack of superlinear scaling is resilient to city definitions in the UK, we will develop explanations in later papers. The integrated nature of the urban economy in the UK, globalisation, the fact that we are dealing essentially with a smaller scale than the US, the fact that the UK is largely a service based economy, these are some of the reasons why we might not expect super linear scaling. And there is even the prospect that as cities become more integrated in a global economy, then any such superlinear scaling that there might have been will disappear. We need to look at the past to second guess the future. More papers forthcoming. Watch this space.

I chair CASA at UCL which I set up in 1995. I am Bartlett Professor In UCL.
View all posts by Michael Batty →
This entry was posted in allometry, Complexity, Economies of scale, power laws, Scaling. Bookmark the permalink.